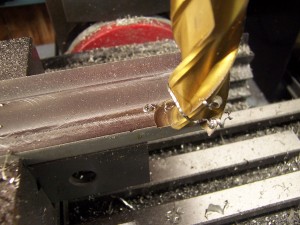 A problem with the Sieg X2 mini-mill [HF 44991, Grizzly G8689, Micro-Mark & others] is that the head can suddenly drop down while you’re milling.Â  Everything will seem fine until the head suddenly drops a bit, which causes the end mill to try to cut too much metal at once, causing the table to start shaking as much as the play in the gibs allows.Â  When you finally hit the power switch and raise up the head you find that there is a big gouge in your workpiece.

This article discusses why it happens and how to prevent it.Â

The problem occurs because the X2’s head assembly moves up and down on the column to control the depth of cut.Â  When you lower the head with the fine-feed knob you cause the pinion gear in the head assembly to push against the underside of the teeth on the rack, which is mounted on the column.Â  It pushes on the underside because there is a torsion-arm type spring on the left side of the mill that is trying to support the weight of the head by pushing upward.Â  Without this spring, the head would crash down on the table if you let go of the 3-arm wheel for making quick/course height adjustments. It won’t drop if the fine-adjust knob is engaged because a worm gear prevents that from happening.

The design of the spring is not very good.Â  It does not provide a lot of upward force, especially when the head is located near the top or bottom of its range. But, with a little help from the friction in the column and spring mechanism, it does a pretty good job holding the head in position MOST of the time. However, sometimes it just barely supports the head enough and that is what causes our problem.

Allow me to use an analogy.Â  Imagine that your body is the milling head.Â  You’re standing on a spring that can barely support you, and you have to adjust your height above the floor by pushing down from the ceiling.Â  Now imagine that a strong hand reaches up out of the floor and pulls you down until your feet contact the floor.

Well, an end mill can sometimes grab enough to pull down the head assembly.Â  Especially, it seems, when you’re milling an edge.Â  I believe that vibration from milling also helps by overcoming some of the friction in column and spring assembly.

The head is going to drop down until the pinion gear is stopped by the tooth on the rack just below the one that the gear has been “pushing down” from.Â  The distance it drops depends on how fully meshed the rack and pinion teeth are.Â  If they are fully meshed it won’t drop much, if any.Â  However, if the teeth are just starting to mesh, then the head can drop down almost the distance between the teeth on the rack, which is .1250-inches or 3.175 millimeters.

There are a number of ways you can prevent or work around this design flaw.

1) The easiest way is to always lock the Z-axis after adjusting the height of the head.Â  Just turn the little lever located behind and a little below the 3-arm quick/course adjustment wheel.

2) Lower the head beyond where you want to make your cut.Â  Then move the head in the upward direction only until you are at your desired height.Â  This means you may have to use your graduated dial, a DRO, or a dial indicator.

Going back to my analogy, when you crank the fine-adjust knob to lower the head you do it by “pushing against the ceiling.”Â  But when you turn it to raise it, it is as if your feet are already touching the floor so the head can’t drop any lower.

3) You could replace the stock spring with something better.Â  If the spring was stronger, the head couldn’t move down while you’re cutting.Â  So a popular modification is to replace the stock spring with air-lift struts, like the ones sold by auto parts stores to hold up the hood or rear hatch of a car.Â  You can buy a kit if you don’t want to design and make your own.

Some have replaced the spring with a counter-weight that is usually located behind the column or hidden under the workbench.Â  It is connected to the head by a cable and pulleys.

4) You can also disconnect the stock spring altogether. Without a spring, gravity will cause the pinion gear to rest against the top of the teeth on the rack instead of “pushing down” from underneath them.Â  The head simply won’t be able to drop down any more. This method also gets rid of most of the backlash in the Z-axis.

However, the head won’t be as easy to raise without the spring and it will come crashing down if you let go of the quick/course adjustment wheel. That would make it hard to use the mini-mill as a drill press. It is not hard to disconnect and reconnect the spring and you might be tempted to do so, but I suspect that sooner or later the bolt might go flying into someone’s face or you might get your fingers pinched.

You know you’re a machinist when … You help your kid do her math graphing homework and measure the points with a caliper.