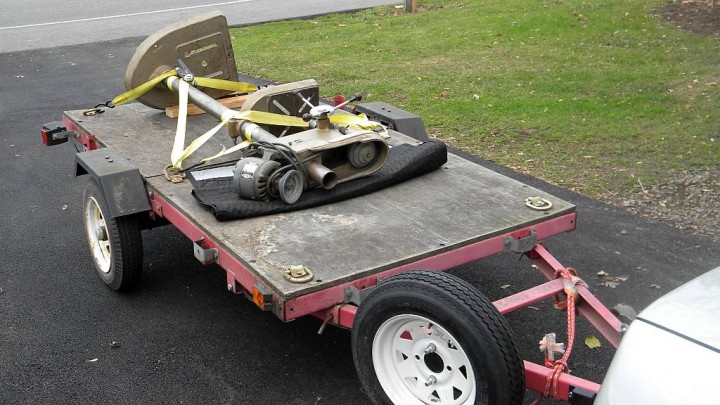 Some might not consider a utility trailer to be a tool but I do and it’s one of my most useful ones.  This article describes why and reviews Harbor Freight’s 4×8-foot utility trailer.

I lost the ability to bring home full-size sheets of plywood and other large items when we replaced my wife’s mini-van with a small SUV about five years ago.  I thought about buying a used pickup truck but I have a long commute and a perfectly good car that gets much better gas mileage than even a small pickup could get.  A truck wouldn’t get driven much it and it would take up a lot of room in our driveway.  Worse, even an old rust-bucket would cost me thousands of dollars and I’d have reoccurring expenses for insurance, registration and maintenance.  So I put a trailer hitch on my Camry and bought an inexpensive utility trailer from Harbor Freight instead.

I’m not certain but I think I bought it on sale for about $225.  They’re often on sale now for about $300 and you might be able to save an additional 20% with a coupon.  The trailer hitch and wiring for my Toyota Camry cost another $300.  The trailer comes without a deck so I also spent about $80 on a 3/4-inch thick sheet of exterior plywood, some paint to help protect it from the weather and a bunch of bolts, washers and lock nuts to attach it to the trailer frame.  With taxes, registration and an inspection sticker the total cost to get it on the road was about $650.

It’s light and easy to move

My trailer’s shipping weight is 159-pounds.  It probably weighs about 250-pounds with the plywood deck and all the accessories I’ve added to it.  It’s very easy to pull by hand even when it’s  loaded and on gravel or grass.  The trailer’s light weight makes it very easy to hook up because I can pull the trailer to my hitch instead of having to back my car up to it.  So I can have it completely hooked up and ready to go in less than 3 minutes (5 minutes if I have to turn my car around in the driveway).  A loop of rope tied to the tongue makes it even easier to move.

Several times I pushed the fully-loaded trailer up a ramp, with one person’s help, and then 250 feet to a spot inside a building where I wanted to unload it.  I could not have done that with a truck.

I took advantage of this feature to store my trailer against a stockade fence for a couple of winters.  But I don’t do that anymore because now it gets used year-around.  When folded it’s about 5-feet high and wide, and about 15-inches thick.  The trailer’s pretty stable when it’s folded up but it could hurt someone if it somehow fell over.  So I’ve always tied it to the fence.  It also takes some strength to tip up and there’s a chance you could hurt your back or pinch your fingers.

The trailer is hinged in the middle of the deck so the back half folds and lays on the front.  The tongue is also hinged so it will  fold against the bottom when you pull a couple of pins.  Once that’s done you can tip the whole trailer up so it sits on a couple of brackets near the fenders that each have two swivel wheels.  The wheels on mine were plastic and the same kind you often see on office desk chairs.  They probably would have been fine on asphalt or concrete but they didn’t last too long on the gravel next to my garage.  After they broke I had to “walk” the trailer to move it.

One problem is the two halves won’t fold completely flat because the hinges can’t accommodate the 3/4-inch think plywood I used for the deck.  They probably would have been fine if I’d used 5/8 or 1/2-inch but I wanted the extra strength and to be able to countersink the heads of the mounting bolts.

The hinges also occasionally cause some problems with the trailer’s lights by preventing the “ground” connection from getting back to the car, probably because of corrosion.  I tried bypassing the hinges with some wire but for some reason that didn’t help.  But it happens infrequently and if I drive it down the road for a mile or so the bouncing quickly wears away the rust or corrosion and the lights always start working again.

It took awhile to assemble

The trailer had to be assembled and it probably took 10 to 15 hours.  The directions weren’t very good and I took apart and reassembled the trailer frame at least twice before I got it right.  Then I had to go buy a sheet of plywood for the deck, drill and countersink holes in it for the mounting bolts, and then paint it before permanently bolting it to the trailer’s frame.  Finally, I had to grease the wheel bearings (optional but recommended), mount the lights, and install the wiring harness.

Of course, after I was done I started noticing used fully assembled utility trailers that could be bought for about the same amount money that I had invested in mine.

I’ve been very happy with my trailer but I would be nervous about hauling something very heavy on it at high speeds for a long distance.  That’s because the trailer’s 12-inch Chinese-made tires are not suppose to exceed 55 mph.

Over the years I have added some accessories to my Harbor Freight trailer to make it more useful and easier to use:

An assortment of ratcheting tie-down straps: I use wide heavy-duty straps for almost everything and I often use more than I need to because it’s not worth taking chances.

Swing back trailer jack (about $26 on sale): This must have accessory keeps your trailer level when it’s unhitched and makes it easier to move.

Wooden Sides – homemade from 1×6 and 2×4 pressure-treated lumber (~$80): I still haven’t decided how to connect the sides together at the corners.  If I need to I just run heavy-duty tie-down straps around the outside.

Six 1/2-inch forged D-rings and mounting hardware (~$45): These are mounted on the trailer’s deck at the corners and near the mid-point of each long side.  They make it a lot easier to attach tie-downs.  Without them you have to attach them to the underside of the trailer where straps could be damaged by edges of the trailer.  I used metal backing bars to keep the mounting bolts from pulling through the plywood deck.  I also used lock nuts so the bolts couldn’t become loose from vibration.

Spare tire ($50) and a spare tire carrier ($13): After five years I decided it would be wise to have a spare tire.  I still need to buy a lug wrench and jack that I can keep with the trailer.

2-ton Shop Crane (~$160 /w coupon): I bought this to safely get a 400-pound jump shear on and off the trailer.  I couldn’t have brought the shear home if I had a pickup truck because I wouldn’t have been able to lift it high enough to get it on the bed.  Now that I have a crane I keep finding other uses for it, and friends who would like to borrow it.

Ramps (still to come): Even Harbor Freight’s ready-made ramps seem kind of pricey.  So I’m probably going to fabricate my own attachments with planks.  Ramps will make it easier for me to get lawn tractors, snow blowers and other items with wheels on and off the trailer.