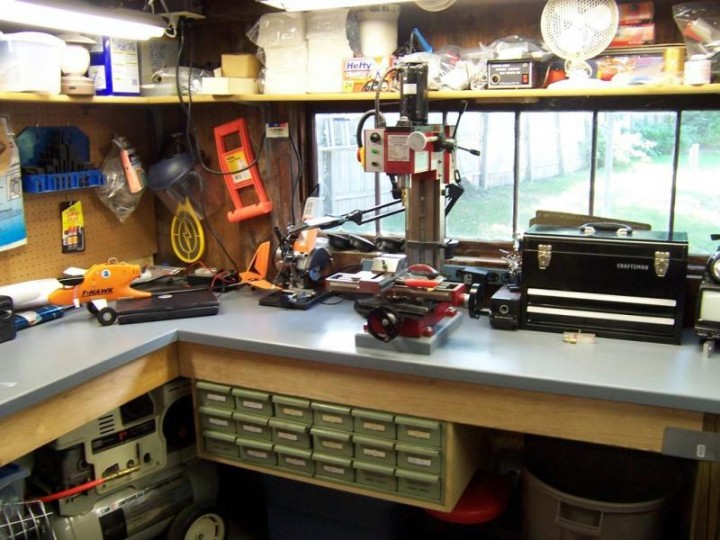 I then used the router with a 1/2-inch round-over bit to round the edges of the workbench.  It’s a little bit more work, but I think it makes the bench top look more finished and professional looking and it makes the edges more comfortable to lean against.  Rounded edges also won’t dent or splinter like sharp ones will if they get bumped with something heavy or sharp.  They’re not hard to make but I recommend practicing on scrap first.

Finishing and painting the top

I haven’t tried it yet but I’ve heard that some people like to cover their bench tops with hardboard.  It’s a cheap, durable, and easy-to-replace surface that doesn’t need to be painted or finished to look good.  I considered using it but decided to paint the top, as I have in the past.

It didn’t take much work to get a smooth painted finish because the particle board I bought came from the factory with top and bottom surfaces that were almost as smooth as glass.  But the edges had small voids that needed to be filled with wood putty and sanded smooth. I then applied a couple of coats of sanding sealer to the entire top.

The final step was to paint it with latex enamel. I choose a light gray color and applied two coats with a brush, lightly sanding after the first coat to minimize brush marks.

Cost is the primary reason why I didn’t a use a laminate counter top for this bench.  Since then I’ve discovered that the “Mr. Seconds” store near me has a good selection at affordable prices.  So I”ll probably buy one for my next bench, which I”ll be building soon.  Although, I will be putting another piece of particle board underneath it to make it stronger and heavier.

Latex enamel is another reason why I’ll probably use a laminated top the next time.  I had to use latex because apparently you can’t buy oil-based enamel anymore, at least not in New York state, because of air quality regulations.  Latex just doesn’t seem to produce a finish that’s as hard and durable.  It still felt tacky after more than a year.  Please tell me if you know of a better alternative.

The next bench is also probably going to have a welded steel square-tube frame.  I don’t think it’s going cost much more and I can make a strong frame that is much thinner than a wooden one.  That’s important because because I want to have enough height underneath it for some roll-around tool chests.  I have a lot of shelves in my workshop but not enough drawers.