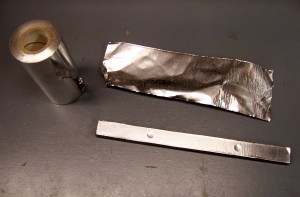 I heard that putting a shim behind the rack on the column would help by causing it to mesh tighter with the pinion gear in the head. So I decided to give it a try. For shim-material I used adhesive backed aluminum tape that was .0035-inches thick. The tape was easy to apply once the rack was removed. I just stuck a piece on the back of the rack (after cleaning it with brake cleaner to remove any oil), then I burnished it with a piece of metal to make certain there were no wrinkles and trimmed the tape to size and around the screw holes with a utility knife.

I applied only one layer at a time and then reassembled the rack and measured the backlash. After the forth layer of tape the backlash was down to .035 inches, a 34% improvement. But the backlash didn’t improve any more after applying the fifth layer. Plus it became difficult to move the head and very difficult to engage and disengage the quick-adjust wheel. So I peeled that layer back off.

It was probably not necessary, but I applied a final layer of thin clear packing tape over the aluminum since it is generally not a good idea to have dissimilar metals like steel and aluminum in direct contact.

Removing the rack was not hard. I have a short rack held on by just two metric flat head screws, although I have heard that some machines have longer racks with more screws. I recommend that you take care not to lose or damage your screws as you may have trouble finding replacements locally. I managed to drop one of mine in the large hole in the top of the head, just in front of the rack, and it took me a while to fish it out. So you might want to plug that hole with a rag or something. By the way, you can get replacement screws, or almost any other part for your mini-mill, from Littlemachineshop.com.

The screws and rack are easy to remove once the head is dropped down as far as it will go. But to get it low enough you have to disconnect the spring torsion-arm supporting the head. It is not hard, as the spring is not that strong, but there is definitely a danger you could pinch your hand or the bolt could go flying into your face, so take precautions.

I want to make it clear that you have to disconnect the torsion arm from the head, and not the spring itself, which is mounted on the column. I found it easiest to remove the single attachment bolt when the head was positioned so the torsion arm was horizontal. I also put a pile of rags on top of my vise to help protect it and the spindle if the head dropped on it after the spring was removed.

Once the head is down all the way it is simple matter to remove the screws and slide out the rack. When you’re done, just reassemble everything and then lift up the head and turn the quick-adjust wheel until the gears mesh again. Then reconnect the torsion arm.

I don’t know how hard it is to find aluminum tape like I used. I think I bought mine at an auto parts store a long time ago. I know you can buy it online in the US here. There are plenty of other materials you could also use as a shim. Please leave a comment if you try this mod and let us know what you used and what your results were.