I would begin by making the aluminum bracket that holds the indicator.  The hardest part will probably be making the holes for the magnets and then epoxying them so they will be flush with the surface of the bracket.

By the way, one of my pictures shows the mounting bracket extending way out in front of the indicator’s probe.  That wasn’t necessary and I’ve since cut the excess off.

I bought the magnets at a True Value hardware store for about $4.  They’re 22mm in diameter and I used a .5-inch center-cutting end mill to make three flat-bottomed holes to mount them in.  You need to keep the magnets close together so they won’t extend beyond the corners of the carriage where they could attract ferrous swarf.  So don’t make the holes any bigger than they need to be.

When it was time to epoxy the magnets I used a small piece of steel to hold the magnets flush with the top of the holes while the glue dried.  You might want to leave one edge of the holes slightly uncovered so any excess glue has a place to seep out.  After the epoxy dries you can scrape off any excess with a razor blade.

Make certain that the bracket and magnets are degreased and perfectly clean and dry before you glue them. I used brake cleaner to degrease them and then washed them using dish soap.

I’m not certain the recess is necessary and the next one I make may not have it.  If you decide to mill one then don’t do what I did and put it on the side instead of the top.  Also, don’t drill the mounting hole and then decide to clean up the top of the bracket with a fly-cutter to make it look prettier for pictures.  That’s why there’s a small gap between the indicator and bracket.  🙂 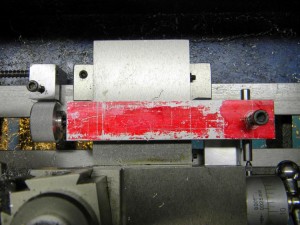 The movable stop that slides on the top of the cross-slide is also easy to make.  It’s made from another piece of 1×1-inch aluminum that’s milled so it fits over the top of my mini-mill’s cross-slide.  The small notch in one of the corners is there so it won’t contact one of the gib adjustment screws.

The locking mechanism is made from a knurled knob that was pressed onto the head of a 1/4″-20 socket head cap screw.  The next one I make is going to use a slightly larger diameter screw with finer threads because I think it will tighten more securely.  Also, I had to add a small neck to the knob so it would clear part of the apron.  The next one I make won’t need it.

As I mentioned earlier, I don’t think the adjustable-length rod on the prototype is necessary and you can always add it later if you want.  Just mount the DRO on the lathe, put a piece of masking tape on the stop and push the indicator’s plunger against it.  It will leave a mark that you can center punch and drill.

Improvements and Other Ideas

I’d like to know what you think of my idea and I’ve tried to making leaving a comment as easy as I can without leaving the door wide open to spammers.  Just write your comment and give us your e-mail address.  If it’s not spam we’ll approve it, register you as a user and send you a password which you can change if you want. 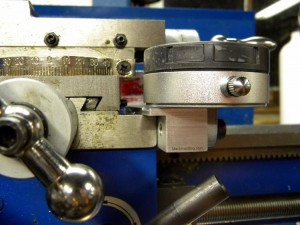 6 thoughts on “A Homemade DRO for the 7x Mini-Lathe”