I try to post at least one new article each week, but I’ve been bogged down on some long articles that just aren’t ready yet.  So, I thought I’d try writing a quick post with some short tidbits that I hope someone will find interesting.

South Bend Lathe has been bought by someone who might actually have the resources and business acumen to re-invigorate the company.

The September/October 2009 issue of The Home Shop Machinist magazine has an article reporting that Shiraz Balolia, founder and president of the well-known tool seller Grizzly Industrial, has purchased the historic South Bend Lathe company.

The company will soon be offering an expanded product line of “ultra-quality” metalworking machinery with a vintage South Bend look, but updated and with high-quality internal parts.  Unfortunately, like everything else it seems, the machines will no longer be manufactured in the United States and will be made in Taiwan instead.

Mr. Balolia is supposed to be a machinist and tool nut who started out rebuilding old metal lathes.  He probably has the financial resources to make a go of this and he definitely has the distribution channels to sell South Bend machines and parts.  Grizzly is expected to be a major South Bend dealer.

It sounds like they will be targeting the hobby and small-volume production markets that seem to be dominated by Chinese manufacturers like Sieg.  Having some more choices would probably be a very good thing.  I just hope that “ultra-quality” doesn’t also mean “ultra-high” prices.

Here’s an article with a lot more information about the acquisition. 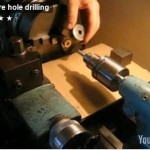 There was an interesting discussion on the Yahoo Mini-Mills group about drilling square holes.  Before EDM equipment stated to become more affordable and common, special drills were often used to make square holes or slots with square ends .  The corners do have a very small radius, but they’re so small you could probably either ignore them or quickly remove them with a file or broach.  Similar drills could also make pentagonal, hexagonal and octagonal holes.

I understand that the drills are still available from the Watts Brothers Tool Works.  They’re not cheap, although they’re cheaper than an EDM machine.

If you would like to learn more, then check out this excellent article that includes pictures and videos.  The Home Shop Machinist forum also has an interesting thread about them with pictures.

I only thought I knew about decimal points

Here’s something that I’m surprised I didn’t learn a very long time ago.  Did you know the U.S. uses periods for decimal points but most countries on the metric system use commas instead?

They also use spaces instead of commas to separate groups of three digits.

I learned this after finding what I thought was an obvious mistake on a set of plans someone submitted to the Mini-Mills email discussion group I operate.  The designer was Dutch and the plans used metric units.  I wasn’t sure if I should believe him when he said it wasn’t a mistake, because Jan Ridders, the extraordinary engine designer, is also Dutch and uses periods for decimals.  Then we found out that Jan does it that way because most of the people interested in his plans are American, or at least they use the Imperial system.  Since then I’ve found out that Canadians also follow the U.S. convention, and I would like to know if Mexicans do too.