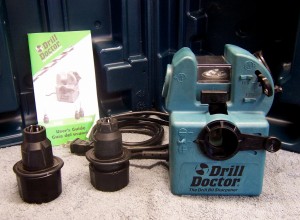 This is a review of the Drill Doctor model 750 drill bit sharpener.  Not that long ago the 750 was Drill Doctor’s top of the line model until it was replaced by the 750X, which you can buy new for about $140.  I’ve seen videos of the 750X in operation and although it looks different, I believe it works in the same way, so you may find this review useful if you are thinking about buying the newer model.

You may also find this review useful if you are considering a Drill Doctor 500X or a used model 500, which was its predecessor.  The main difference is that the 750X and 750 come with an extra chuck that allows you to sharpen bits up to .75-inches in diameter.  The 500X/500 can only sharpen drill bits up to .50-inches in diameter unless you buy the larger chuck separately as an accessory for about $40.

The 750X and 700 are also the only models that come with a carrying case, although you can buy one for the other models as an accessory.

I have heard that a good machinist should know how to sharpen a drill bit by hand, without a jig or fixture of any kind.  That’s probably true, but I am a mostly self-taught home machinist with no one who can show me how to do it.  I have tried it a few times but each attempt was a complete failure and I would have been better off continuing to use the dull bit.

I have also heard that even if you can hand grind a bit, it is hard to grind both flutes evenly so they will drill a round, exact-sized and straight hole.  Putting a split point on a drill bit is suppose to be even harder and requires a grinding wheel with a sharp, not rounded, edge.

So for me, sharpening drill bits by freehand grinding was not an option.  That left me with the following choices for dealing with my dull drill bits:

I decided I wanted a Drill Doctor because they got great customer reviews on Amazon.com.  When someone did badmouth it, it often seemed like it might be because they hadn’t learned to use it properly by reading the instructions or watching the video that came with it.

Cost was an issue for me.  A new 750X costs about $140 and the 500X is about $30 less.  That’s a lot of money to spend just to sharpen some drill bits.  Especially if you have a limited budget and there are more important things your workshop could use.  In my case, that would be a rotary table.

So I waited patiently for more than a year for a Drill Doctor in very good or better condition to show up on Craigslist.  I finally bought a model 700 in excellent condition for $65.

The 700 (and 750X/500X/500) can sharpen most twist drills with a 118º or 135º point angle.  All four models can grind a standard point or create a split point bit.  They can also sharpen masonry drills and even sharpen left-handed drills if you buy a special $40 chuck.

All four can handle drills from 3/32 to 1/2-inch in diameter.  But as I mentioned earlier, only the 750x and 700 come with an extra chuck that allows them to sharpen drills up to 3/4-inch.

The diamond grinding wheel is capable of sharpening bits made out of carbon steel, HSS, cobalt and carbide.  It will not sharpen brad point bits.

I haven’t tried to sharpen a masonry bit yet, but here is how you sharpen a twist drill.

First, you need to adjust a couple of levers on the machine.  One lever is set to grind either a 118º or 135º point.  (The newer 750X apparently lets you set a custom angle from 115º to 140º).  If you’re not sure of your drill’s angle then you can check it using a gage on the front of the machine.  A second lever with three positions sets the relief angle for masonry drills, twist drills or for “extra relief.”

The drill bit is held in a round chuck that has flats on it and a cam.  The flats are used to align the chuck in the sharpener’s three ports, which will ensure that the drill’s flutes are correctly aligned with the diamond sharpening wheel.

To begin, you put the drill bit in the chuck and tighten it, but leave it just loose enough so you can slide and rotate the drill in the chuck.  You then put the chuck in the alignment port while holding the alignment lever open.  Next, you then push the bit against a depth stop and release the lever.

Releasing the lever closes a clamp around the bit.  You rotate the drill bit until you can see and feel the clamps hold the bit at its narrowest point.  Then tighten the chuck completely so the bit can not move.

This process is not hard, but it is the most important part of the operation.  What you are doing is setting the distance that the drill extends out of the chuck and aligning the drill’s flutes with the flats so they will be ground properly in the sharpening and split point ports.

The chuck is then removed from the alignment port, plugged in the sharpening port and the motor turned on.  Next turn the chuck clockwise for an even number of half-turns.  During each turn the cam on the chuck briefly causes the drill bit to come in contact with the diamond wheel, sharpening the bit.

You want to do this an even number of times so each flute is sharpened equally.  The number of turns required depends a great deal on the size of the bit.  According to the owner’s manual, a 3/32-inch bit may take 2-4 half-turns while a 3/8-inch bit might take 16-20 half-turns.  It’s easy and takes very little time.

At this point you will have a sharp drill bit with a standard point.  You can now add a split point if you want by taking the chuck out of the sharpening port and putting it into the split point port.  The manual then says you should then “gently tap the bit against the sharpening wheel twice.”  You then remove the chuck, turn it 180º and repeat the process.

What you are doing here is touching each side of the drill bit to the diamond wheel’s edge to create the split point.

This is the only thing about the Drill Doctor model 750 that I can really criticize.  For a perfectly centered split point you need to tap each side of the point equally.  I’ve had good luck doing this so far, but it could be a problem.  Apparently the newer 750X addresses this issue by adding a stop that ensures each side is split equally.

The Drill Doctor doesn’t make much noise or vibration, and it will make even less if you operate it on a folded-up cloth shop rag instead of a hard surface.

It did not take much practice before I learned how to sharpen and split the point of a drill bit in less than two minutes.

The Drill Doctor is mostly made of plastic.  I would not let that bother you.  Its parts are robust and look like they will last a long time.  I don’t know about their cost, but it looks like replacements are available if you should need them.  I do know that a new chuck costs about $40.

The grinding process creates grit that can cause the moving parts in contact with each other to wear out more quickly.  So the owner’s manual recommends that you clean it after sharpening 20-25 drills.  It does not take long and is not hard, although you do need to be a little careful when reassembling the chuck.  The outside of the chuck is plastic but the inside has six metal jaws that fit into small slots.

The owner’s manual says that the diamond wheel will last an average of more than 200 sharpenings, and if you don’t sharpen bits bigger than 1/2-inch you can double its life by turning it upside down.  If that’s true, and I believe it is, then the operating cost will be about 5 to 10 cents per drill.  A new diamond wheel, which is very easy to install, costs about $20.  It probably won’t last that long if you sharpen mostly larger diameter drills because they will cause the wheel to wear out faster.

The Drill Doctor appears to be well-designed, well-made and it will probably last a long time.  It quickly, easily and correctly sharpens drill bits, just like the manufacturer says it will.

Its biggest drawback is its cost.  The Drill Doctor can probably quickly pay for itself in a production shop that spends a lot of money buying new drills instead of sharpening old ones.  But it could take years for a Drill Doctor to earn back its cost in a home workshop.

Of course hobbyists don’t always take cost into consideration when they want to buy a new tool.  And there is a certain pleasure that comes with using a nice sharp drill bit.

Let me know if you have any questions.  I’ll try to answer them.

Disclaimer: Information about the model 750X and 500X came from the Drill Doctor web site.  I believe I have passed it on correctly but you may want to verify it before buying one because of this review.

Amazon reviews of the 750X