I’m learning how to TIG weld 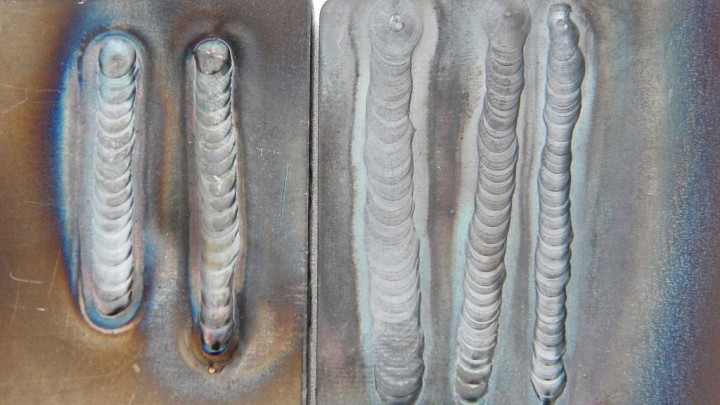 The stringer beads on the left were TIG welded by my instructor. The ones on the right were the made by me after about an hour of practice.

I started taking a 10-night, 30-hour TIG welding course this week at a welding supply company.  I enrolled partly because I enjoy learning new skills and partly because TIG welding is especially useful in a machine shop.  You can use it to weld almost any kind of metal and it can make very small, precise and neat looking welds with very little heat distortion.  It’s also a very clean welding process that you could do in your living room without getting yelled at too much because it doesn’t produce any spatter or sparks and it creates little or no fumes.

Machinists will frequently use TIG to add a new layer of metal to parts that are worn and then they’ll re-machine them.  Mistakes, such as a hole that was drilled in the wrong place, can be repaired in the same way and you probably won’t be able tell they ever existed.

TIG uses electricity to create heat with an electrical arc, which makes it similar to MIG and “stick” welding.  But in those two processes the electrode (a wire or rod) gets melted and deposited in the weld.  But a TIG electrode doesn’t get “consumed.”  It just creates heat and a filler rod is used to add material to the weld puddle if it’s needed.  So it’s very much like oxygen-acetylene gas welding but with some huge advantages.

TIG welding does have some disadvantages

Being able to weld aluminum is one of the best reasons for buying a TIG welder.  You can weld aluminum with a MIG welder but you’ll need to invest in a spool gun and a tank of argon gas.  And you still won’t be to make welds that are as precise and as neat as those made by a TIG welder.

By the way, most TIG welders can be used to do stick welding.  You just replace the torch with a “stinger” to hold a welding rod and go to it.

That’s my real quick overview of TIG welding.  If you want learn more this Wikipedia article is a good place to start.  You can also leave a comment if you would like to hear more details from me.

I was in my welding class two nights and I worked late (until 8 PM) on two other nights and all day today (Saturday).  Monday night was spent cutting our grass and doing other household chores.  And I went to bed at 8 PM last night because I’ve caught a cold (my first in 2 or 3 years) and I was exhausted.  So I haven’t gotten any work done on my CNC router this week yet, although I am hoping to spend a good part of tomorrow working on it

I did get some work done on my “winter” workshop.  Some of my wall space was taken up by large plastic storage bins that I’d filled and stacked to the ceiling with things that we don’t use very often.  I got rid of some by ruthlessly throwing out (or donating) things we’ll probably never use again. The room also has a really nice big computer desk that’s kind of the modern equivalent of a roll-top desk because all the storage compartments and cubby holes it has.  I was going to keep it but I’ve decided not to so I can have a longer workbench and more room for tools.  So I’m going to have to throw out or find other places for the things that are in it.  I think it’s going to be a tedious chore and some of the storage bins I just emptied will get filled back up.  But it has to be done.

2 comments to I’m learning how to TIG weld

I don’t know the key to success, but the key to failure is trying to please everybody.

— Bill Cosby
Copyright © 2012 MachinistBlog.com and its contributors - All Rights Reserved