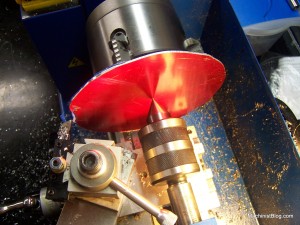 This article describes how I made two round disks on my lathe out of sheet metal that was too thin to be held in a lathe chuck.  I also could not use a mandrel because one of the disks was not going to have a hole drilled through its center.  The two disks were made from .073-inch thick aluminum sheet metal and are about 5-inches in diameter.  They are the top and bottom cylinder plates for the Stirling engine I am building.

First, I want to give credit where it is due.   I learned this from “Bogstandard” who described it on the Home Model Engine Machinist Forum and illustrated it with lots of nice pictures.  He calls this method friction turning and uses it to make flywheels out of flat plates for models, which can be sometimes be easier and cheaper to obtain than a chunk of large diameter round stock.

With this method the work piece is held against the jaws of the lathe chuck by a live center in the tailstock.  This allows you to turn down the diameter of the entire length of the work piece.  The jaws are opened so their outside edges are a little less than the finished diameter of the work piece.  Bogstandard recommends that you put an appropriate size piece of round stock in the chuck, presumably so it helps support the middle of your workpiece.  I did not do that for this project and it still worked fine.

I started by laying out two circles on the sheet metal that were larger than the finished size.  I then cut them out with my band saw, center punched their centers and covered the backs with a single layer of masking tape.  I did not overlap the tape, so the tape thickness would be uniform and the disk would be held perfectly flat against the chuck.  The tape creates extra friction so the chuck face can turn the work piece without it slipping. I have seen variations of this method where double-sided adhesive tape has been used instead.

I know now that I could have turned both disks at the same time by fastening them together with double-sided tape.  But I hadn’t done this before, so I decided to play it safe and turn each of the rough disks separately.

Turning them was simple and uneventful.  I put the blank against the face of my four-jaw chuck, aligned my live center on the center hole I had punched and used just enough pressure so the live center would turn.  The disks were close to the maximum diameter that my lathe could handle, so you may notice in the pictures that my lathe bit is not at the optimum angle.  I decided to just get the disks round and worry later about getting them the exact size.

I was making interrupted cuts because my disks did not come off the bandsaw anywhere near round, so my cuts were shallow and careful.  Even so, I did manage to jam one of the disks with the lathe bit.  No harm was done because the lathe chuck just slipped harmlessly on the back of the disk, tearing the tape just a little bit.

Once both disks were done, I took the smaller of the two and scribed a circle on it that was the final size.  I then fastened the big disk to the back of it with double-side tape, remounted them on the lathe and turned them down to the final size.  When I was finished I had two identical-sized disks with nicely machined edges.