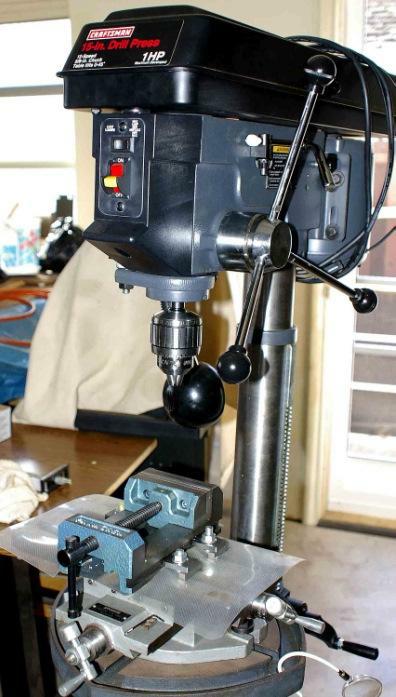 This is another excellent article by Mikey, a frequent contributor to MachinistBlog.com and winner of our “Machining Metal as a Hobby” contest.

The Craftsman 15″ Drill Press, Model 137.229150, is a floor model commonly found in many home shops.  Made by Rexon of Taiwan for Sears, Grizzly and others it is a typical consumer grade drill press.  When new this machine is quite functional and if you use it to drill holes in wood and the occasional piece of metal then this drill press will give you years of service.  However, if you are a metal worker and need more accuracy in your machine it’s a whole other ball game.

The accuracy of these machines when new is not too bad but in a few short years mine developed significant run out, with 0.003″ total indicator run out (TIR) at the spindle and double that at the chuck.  That may not seem too bad but let me tell you, 0.006″ of run out at the chuck is enough to visibly see the bit wobbling!  My spindle bearings had developed play that I could hear and feel and I knew it was time to do something about it.

While it may appear to be daunting it turns out that restoring it is not difficult.  However, it does require access to a hydraulic press and a puller for the spindle pulley so take that into consideration.  Other than these tools no special tooling is required beyond that found in the typical home shop.  If you or your friends don’t own a hydraulic press all machine shops and most auto repair shops do; the cost to press the bearings off and on should be minimal.

If we consider where run out could come from it will likely be the spindle assembly, the arbor or the chuck.  The spindle assembly is basically the drive sleeve that drives, supports and guides the spindle at the top, the solid spindle itself, and the four bearings that support these components.  I suppose the quill could contribute but unfortunately there is no provision for improving the accuracy of the quill so it’s a moot point.

The manual does not list part numbers for the above components but you can order them from the Sears Parts Direct website at reasonable cost using their illustrated parts breakdown.  I suggest replacing the spindle, the drive sleeve and all four bearings at this time.

I also suggest you obtain precision after market bearings instead of using the OEM bearings.  You will need 3 each 6204ZZ and 1 each 6203ZZ.  I chose to replace one of the 6204ZZ bearings with a 6204-2RS; this bearing is sealed and resides at the bottom of the quill where it is exposed to chips and cutting fluid.  All of these bearings are available from your local supplier but are cheaper on eBay.  I prefer to use Nachi bearings for their quality but this is a personal choice.

Angular contact bearings are designed to take both axial and radial loads, unlike radial bearings which are made for radial loads only.  Consider that when using a drill press to push a drill into a work piece both axial and radial forces are at work.  Sort of makes you wonder what the designer was thinking, doesn’t it?  Take a look at a good American drill press, like a Clausing, and you’ll find an angular contact bearing at the end of the spindle.

The chuck arbor is another potential source of run out and I typically change it to a new Albrecht or Jacobs arbor when installing a new chuck.  The OEM spindle requires a #2 Morse Taper. 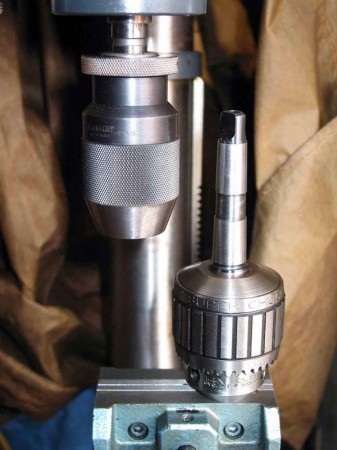 If you are using the OEM chuck for woodworking or general use then it may suffice.  However, I would consider replacing it if you need to drill a precision hole.  You can use a keyed chuck, like the Jacobs Super-Chuck 14N on the right, or a keyless chuck like the very accurate Albrecht on the left.  Both are far more accurate than your drill press will ever be and can be had on eBay at reasonable cost.  If I could only have one chuck I would choose the Albrecht for the obvious convenience and accuracy it provides.

In summary, we are going to replace the parts in the drive train that could be causing run out and consider replacing the arbor and chuck, which are additional sources of potential run out.

Okay, let’s get this thing apart!  As always, please work carefully and proceed at your own risk.

Disassembly is now complete and all parts can be cleaned and inspected.

Assembly is basically the above procedure in reverse.

Use grease sparingly during assembly.  You need to grease the spindle but remember that the spindle is moving up and down through the drive sleeve during operation and the belts are subject to flying gobs of grease as this occurs.

I would recommend doing a rebuild if you are having run out issues.  It’s not hard to do and the cost is more than acceptable (if you don’t count a new chuck).  The improvement in performance is significant – run out at the arbor on my drill press is now less than 0.0005″ TIR and that drill bit looks like it’s standing still!

Update: It is now February 2010 and the run out at my arbor is still under 0.0005″ TIR despite hard use in a typical hobby machine shop.  I believe the use of high quality bearings minimizes wear on the spindle and drive sleeve and help to maintain accuracy.  At this rate I may never get to try that angular contact bearing!

I am not young enough to know everything.