Inexpensive DIY tachometer for a mill or lathe 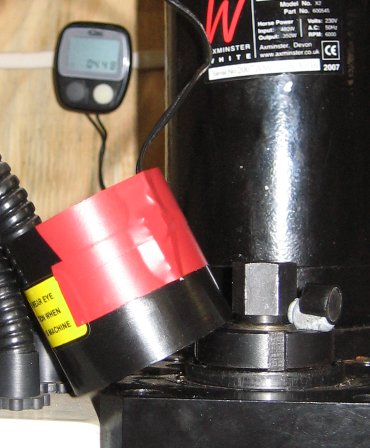 It looks like Adam mounted the sensor in the spindle cap and is using putty to hold the magnet on the spindle. I would have done it a little differently.

Here’s an idea I haven’t seen before.  Adam made a very inexpensive tachometer for his variable speed X2 mini-mill using a cyclometer (bicycle speedometer).  Almost any wired cyclometer will work and you should be able find one with a nice big display for less than $15.  (You probably don’t want to get one that has a wireless sensor because they’re more expensive, you’ll have an extra battery to replace occasionally and you might get erroneous readings caused by the receiver picking up electrical noise from your motor).

Someone left a comment with a link to a tutorial on Instructables with more details about making one of these.  The author, Jose, explains that you basically just have to glue the magnet that comes with the cyclometer to your spindle and somehow mount the sensor within about a 1/4-inch of the magnet when it spins around.

He says those numbers will display the RPM in hundreds, regardless of circumference of the object you mounted the magnet on.  I don’t why that is, even though I was once good enough at math to get an A in college calculus III.  There’s a chance I’ll wake up in the middle of the night with the answer, or have a revelation while in the bathroom.  But just in case I don’t, I would appreciate it if you would leave a comment with the answer if you have a good “explanation for dummies.”

9 comments to Inexpensive DIY tachometer for a mill or lathe

You never really lose until you quit trying.

— Mike Ditka
Copyright © 2012 MachinistBlog.com and its contributors - All Rights Reserved