This is a review of the Harbor Freight 1×30 belt sander, model #2485.  I noticed it was on sale and remembered Mikey telling me that a belt sander is a better tool for grinding lathe bits than a bench grinder.  So I checked the customer reviews for it on their web site and they were generally very good.  Then I searched for machinists who were using it to sharpen HSS metal lathe bits.  I didn’t find many, but I did learn that many wood turners were using it to sharpen their HSS blades.  It was also highly regarded by many knife makers, who were using it to both grind the shapes of their blades and sharpen them.  So I decided to take a chance and buy one.  This review is going to discuss just the sander itself.  I hope to follow it up later with another one that will talk more about how well it works for sharpening HSS lathe bits in a home machine shop.

This sander normally sells for $50 but it was on sale for $40.  I used one of HF’s easy-to-find 20%-off any single-item coupons to get it for $31.99.  I also purchased some Zirconia alumina belts for it because they were recommended by the knife makers.  Harbor Freight only carries 40 and 80 grit belts in packages of two for $2.99.  But you can easily find other vendors selling them in a much wider variety of abrasives and grits.  You can even buy a leather belt for stropping edges and cloth belts you can impregnate with polishing compounds.

My sander came with a lot of problem that hadn’t been mentioned by other owners so I started wondered if mine was typical or a rare lemon.  I’d bought the last one at the store so I couldn’t exchange it for another one.  So I did more research and learned that some sanders come with lots of problems and others with few or none.  So, don’t hesitate to exchange yours if it comes with some quality control issues you can’t live with.

It was hard to put the belt cover on

It’s pretty quick and easy to change sanding belts.  The belt cover is held in place by a single knob at the top and a couple of tabs at the bottom which fit into slots.  Mine came off easily but it was difficult to put it back on because it was hanging up in a couple of spots on the frame, which seems to be made of either die-cast aluminum or zinc alloy.  I found some thick paint runs in those places which I removed with a finishing file.  I also found a small burr around the inside edge of the plastic cover which I removed with sandpaper.  It’s now much easier to put back on.

To change the belt you’ll also need to remove a small transparent plastic cover over the top wheel that is held on with a Phillips head screw.  The screw just needs to be loosened and I’m already thinking about eliminating the need for a screwdriver by making a knob or button for it.

The motor and idler pulleys have an aggressive crown which helps the sanding belt stay on them.  One of the pulleys can be tilted with a knob to control the belt’s tracking.  I was pleased to find the belt would stay on over its entire range of adjustment.  But I discovered I couldn’t adjust it enough towards the motor to perfectly center it.  Adjustment in that direction was limited by a spring used to prevent vibration from turning the adjustment knob.  One of my photos will show you how I easily fixed it by adding a couple of small washers to push the adjustment lever more in the direction I needed it to go.

The motor pulley was loose

While troubleshooting the belt tracking I discovered that the motor pulley was loose and not positioned correctly on the motor shaft.  Probably because it had been put on backwards so you couldn’t get at its locking screw.

The table leveling screw was too loose

The sander’s table is suppose to adjustable from 0-45 degrees but you can actually adjust it so it’s almost vertical.  There is a 6mm set screw near the back edge that you have to adjust so the table will stop when it is perpendicular with the sanding belt.  Unfortunately, the screw fit so loosely that it was sure to turn and lose its adjustment because of vibration.  Its size and location makes it hard to put Loc-tite on it so I’ve replaced it for now with a bolt.  The bolt sticks up above the table but that’s not a problem because it’s behind the platen.  It fits better and is easier to adjust but it also needs something to prevent vibration from turning it.  So I’m considering one of these fixes:

Even with all these problems my new 1×30 belt sander would have been very usable right out of the box if it weren’t for one thing.  The platen, which is right behind the sanding belt and the thing you push your workpiece against, was nowhere near parallel with the belt.    So I put it in a vise and tapped it with a hammer until it was almost a right-angle and then I bent it by hand until it was perfect.  I may machine a replacement if it doesn’t stay that way.

The platen wouldn’t stay in place

The platen shifted after I used the sander a couple of times.  I found a big tall burr along one of the adjustment slots was limiting the holding power of one of the mounting screws.  So I filed the top flat and replaced the original flat washers with larger ones.

The platen was tilted

My platen was tilted to the right so it stuck out from behind the belt.  It looked like it was because the bottom was bowed when they stamped the slots in it.  I tried filing and then milling it flat but that didn’t completely fix it.  It turns out I had to also file the frame flat where it was mounted.

It vibrates more than it should

It’s acceptable, but I think the sander vibrates more than it should.  I think it’s probably caused by the pulleys which all have a very noticeable amount of run-out, especially the motor pulley.  At this point I don’t know how I’m going to fix it or if I’ll even bother.  They’d be easy to true on my lathe if I can figure out how to mount them (I still don’t own any mandrels).  I may also retrieve my favorite lathe file, which is on loan, and use it to try and remove the high spots while the pulleys are still mounted on the sander.  Please speak up if you think you have a better idea.

The table is one piece and die-cast from either aluminum or zinc alloy.  I think it locks easier and more securely if you add a flat washer between the adjustment slot underneath the table and toothed washer the factory wants you to use.

I expect to modify the table someday to make it easier to grind precise angles on lathe bits.  I’m still kicking ideas around.  One is to bolt an aluminum plate on top of the table with grooves for a small miter gauge.  Another is to bolt on a straight edge that I could slide angle plates along.  Until then I’m probably going to just draw some reference lines on it.

I added the two silver washers so I could adjust the belt tracking more towards the motor. 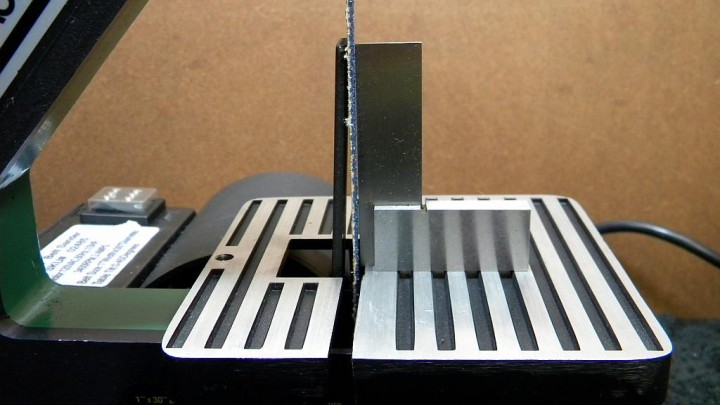 A tall burr interfered with one of the platen's mounting screws.

Milling the bottom of the platen flat help me determine the sander's frame also wasn't flat where the platen is attached. 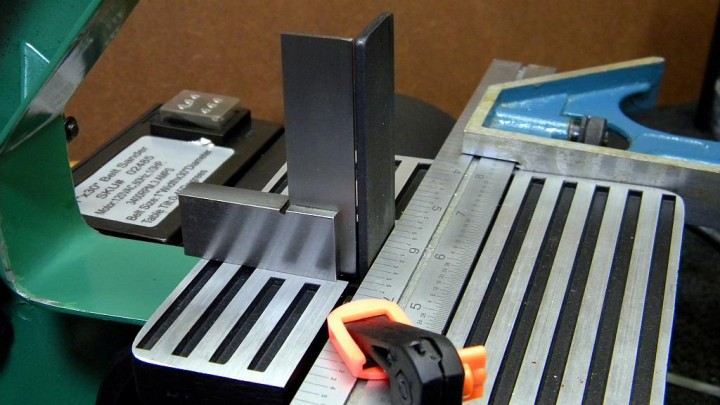 Here's how I made sure the platen was square with the table. On the far left you can see some of the filing I did on the frame so the belt cover would go on easier.

If you don’t like how the world treats you then maybe you should look at how you treat the world.

— R. Roll
Copyright © 2012 MachinistBlog.com and its contributors - All Rights Reserved