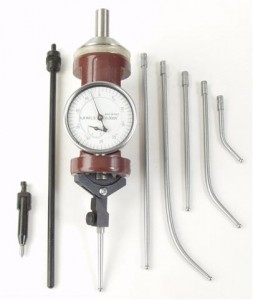 Don’t tell my wife, but I ordered one; even though it seems like we’ve been bleeding money lately.  I’m a little nervous about its quality because it’s probably a Chinese import; but the price is very good, I’ve always wanted to play with one, and it should make centering my new rotary table a lot quicker and easier.  If it’s well made then I will have gotten a great bargain.  And if it isn’t, then I’ll have something to write a review about.

I found a couple of videos in case you’re not familiar with this kind of indicator.  The first one is from LMS and it shows a coaxial indicator being used to center parts under a mill.  They can also be used with lathes and this second video shows one being used to check a mini-lathe’s tailstock alignment.

One last thing.  I’ve decided that I need to either get the forum fired up or get rid of it.  So I’ve been posting most of the good deals I find out about there.  But if I find a really good deal, like I think this one might be, then it will probably show up on the front page of the blog.

— Unknown
Copyright © 2012 MachinistBlog.com and its contributors - All Rights Reserved