How To Square Up Stock On A Mill

This is the best video I’ve ever seen on squaring up a piece of stock on a mill.  You’ll also see how a pro deburrs edges and see how quickly and smoothly he can turn the hand wheels (I don’t think he’s using a power feed).  He also says you should start with a piece of stock that’s been cut  so you’ll only need to make one rough cut and one finish cut on the mill.  That sounds like a good advice if you have a Bridgeport but it’s probably not doable if you have a hobbyist-type mill because you may only be able take off .020 to .050-inches in those two passes.  So your saw cuts (hacksaw, bandsaw, cold saw, etc.) would have to be very precise and square.

This is the last article in Mikey’s series about grinding lathe tool bits.  In part 1 he discussed his experiences with grinding bits, why he uses a belt sander instead of a bench grinder and introduced some terminology about tool bit shapes and angles. In part 2 he covered tip geometry and tool shapes in more depth.  Here he describes the actual process of grinding a tool bit.

ALWAYS wear eye protection, hearing protection, a dust mask and leather gloves when grinding. No tool is worth sacrificing your body parts.

Remember, no angle works in isolation

Think about what you need with regard to shape, strength, tip access, and the type of material(s) you will use the tool on. Choose your relief and side rake angles and when you are clear on what you intend … just grind it that way. This thought process is illustrated below.

Let’s grind a general purpose right hand tool from a 3/8” HSS blank that should work with steel, aluminum, plastics and stainless. It is not optimized for any of these materials but should work fairly well with all of them. You can rough, face and finish by varying the lead angle of the tool. By choosing a general shape for multiple materials we need to think about the compromises these choices force on us:

As you can see, multi-purpose tools require some compromise. I have given more emphasis to tip strength because we will also be using this tool for roughing, which creates large cutting loads in harder materials. We’ll discuss this further in the End Notes.

Seen below is my grinding setup. It is a ½ HP Craftsman 2” X 42” belt sander with a custom steel table settable to precise angles. The platen is a 2”W X 9” L X 1/4” thick piece of O-1 ground steel to which a Pyroceram liner is epoxied; it is dead flat after years of frequent hard use. It is equipped with a 24 grit Aluminum Oxide belt, soon to be coated with a wax stick lubricant. This belt cuts very fast and very cool when using only light to moderate pressure applied toward the belt and I highly recommend it for shaping. Just ease up on the pressure as you near the end of the grind to eliminate coarse grind marks. After shaping, you can change to progressively finer grits and produce a near mirror finish if you choose.

The table is set to 15 degrees to cut the side relief angle, the vertical angle under the side edge. The side cutting edge angle is determined by the angle with which you present the tool to the belt; as you grind it you are grinding the side relief angle at the same time. For this tool the side cutting edge angle is approximated so that 60% of the side is ground off when I am done. If I want a rougher I grind 40% off the side, 70% for a facer and 80% for a finisher. END_OF_DOCUMENT_TOKEN_TO_BE_REPLACED

Here is a table that presents the table angles we need to set when we grind standard lathe tools.  Note that the headings at the top of each column eliminate the word “angle” after each heading but otherwise matches the diagram above.  The front relief (angle) in the table is the same as the end relief angle in the diagram above.  The angles here are very important starting points for modifying tools.  If you simply wish to grind standard tools then grind with the angles listed here.

In order to alter the tip geometry of our tools to lower cutting forces: Use the largest angle listed in the table as a baseline, and then add about 25-40%.  This works out to about 2-5 degrees higher than the largest recommended values and your tool will work better on your little lathe without endangering the tip excessively.  While these changes may seem very small and insignificant the reduction in cutting forces they produce are anything but.  The tool used for our cutting force demonstration earlier was ground with these conservative changes and it works well.

Keep in mind that none of the tip angles works in isolation.

For optimum performance you can grind a set of tools (rougher, facing and finishing) for each material you commonly work with.  They will work far better than general purpose tools and are worth the time it takes to make them.  If you grind them as you need them you will have a complete collection in no time.  If you do make sets I suggest grinding the same face of each tool before changing your table angle to save setup time.

General purpose tools allow you to minimize the number of tools you need to grind.  For example, if you had to minimize the number of tools in the drawer you could have a general purpose right hand and left hand tool, a RH and LH general purpose knife tool for facing (see the end of this discussion), a zero-rake 60 degree threading tool and a zero-rake round nose tool with a 1/64”-1/32” nose radius (for between-shoulders work and general cutting of brass).  Add a HSS blade-type cut off tool with a 7 degree face used in a rear-mounted tool holder and you can handle most general jobs in a hobby shop.

An important angle you may see that isn’t in any table is called the Lead Angle (LA).

Increasing LA can significantly improve finishes; for this reason MHB recommends using the maximum LA possible as long as there is no chatter.  Remember that increasing LA also increases cutting forces because more of the side cutting edge comes into contact with the work.  The effect of this is most readily seen on thin, flexible work pieces in the form of chatter.  On larger pieces that don’t flex much a large LA can really improve finishes.

If you develop chatter at any time, especially on thin pieces or on hard materials try reducing the LA (move the side cutting edge more perpendicular to the work) and things will improve.  In some cases going to a negative LA really helps, especially on thin work or an ambitious roughing cut.  The effect of reducing LA is equivalent to reducing depth of cut and increasing feed, which has a positive effect on reducing chatter.  Try playing with LA to further modulate cutting forces on the lathe – it can be useful.

Another term you may see is the Angle of Keenness.  This is the included angle formed by the side and top of the tool as you look at it from the tip end of the tool.  For harder materials this angle is less acute and for softer materials it is more acute.  Back in the day, before angle tables became widespread, machinists ground their tools with this angle: less acute for hard stuff, more acute for soft stuff.  Since the hardness of the material being cut is accounted for by the angles found in the angle table I ignore this angle but mention it here for completeness.  If you were paying attention, this is the angle that changes as you alter your relief and side rake angles.  Those old guys knew what they were doing.

Lathe tools come in many shapes, each suited to a particular task.

END_OF_DOCUMENT_TOKEN_TO_BE_REPLACED

Grinding Lathe Tools on a Belt Sander – For the New Guy 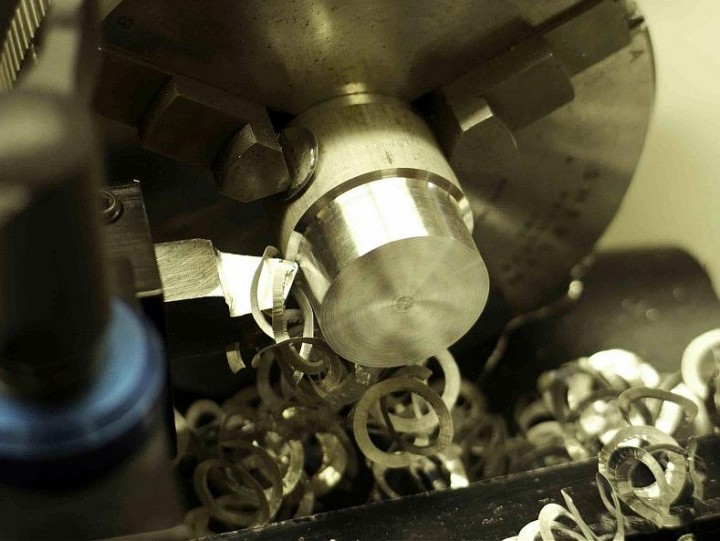 I’m a believer.  As a new guy I totally sucked at grinding lathe tools.  It’s almost painful to admit how many stubby, misshapen, multi-faceted, overheated and just plain ugly lathe tools I made back then.  The amazing thing is that some of those tools actually worked as well as the pre-ground tools that came with my lathe.  I started to believe those guys that tell you, “… just get it close and it will work.”  Of course, I was too embarrassed to call myself a hobby machinist with those Franken-tools so I bought an expensive set of inserted tip carbide tools that I thought would make a major difference but was disappointed.  They couldn’t rough as deep or finish as well as my ugly high speed steel (HSS) tools, at least not on my lathe, so then I believed those guys that tell you, “… stick with HSS on a hobby lathe.”  Hey, desperation can make you mighty receptive, you know.

Fast forward 15 years and now I believe, after having ground many experimental tools, that the best lathe tool for a hobby-class lathe is a HSS tool with its tip geometry modified to reduce the cutting forces it produces, ground on a belt sander.

Since standard tools are intended for use on industrial lathes their geometry can produce cutting forces that are excessive at times, especially when roughing but this can also affect sizing and finishing cuts.   To be clear, cutting force is that force produced by the tip geometry of the tool that must be overcome to make a cut.   We can look at it as a continuous resistance generated by the shape of the tool as it is pushed through the material during the cut.  A standard HSS tool has a broad, wedge shape and creates a lot of resistance (carbide is even worse), so we must dial down our control inputs (depths of cut, feeds and speeds) to use them.  If we alter the tool so it has a narrower included angle it cuts with less resistance, thus lowering the rigidity and power needed to make a given cut.

We still have to manage our control inputs but since the cutting forces are lower we would expect to be able to cut deeper, achieve better accuracy in sizing and finishing cuts, and finish better with greater ease before running into the rigidity and power limits of the lathe. And this is exactly what happens.

To demonstrate this I took a 0.050” deep cut in 12L14 mild steel on my admittedly older hobby-class manual mini-lathe using a very good quality inserted tip carbide roughing tool with a new insert, a sharp freshly ground high speed steel (HSS) roughing tool with standard tip geometry ground for steel, and the general purpose tool with modified tip geometry (not optimized for steel) that was ground for this discussion.

END_OF_DOCUMENT_TOKEN_TO_BE_REPLACED

You pile up enough tomorrows and you’ll be left with nothing but a bunch of empty yesterdays. I don’t know about you, but I’d like to make today worth remembering.

— Harold Hill in “The Music Man”
Copyright © 2012 MachinistBlog.com and its contributors - All Rights Reserved